Today a video on Lithuanian social media showed a group of men vandalizing the rainbow flag, symbol of the LGBTQI+ community. The description and subtitles state that ‘no ideology can be higher than the concept of family […] that is the union of a man and a woman’. This statement shows just how much work we need to do to dismantle heteronormativity and gender binarism. However, LGBTQI+ rights are human rights under EU law and treaties, and change is slowly happening.

Hateful media representations of the LGBTQI+ community are just another reminder of the endless work we all need to do to educate ourselves and those around us for a more inclusive and respectful reality. They are a reminder that, despite decades of social battles and advocacy, many people disrespect LGBTQI+ rights and believe that sexual orientation and gender identity belong to the private sphere of an individual’s life. Unfortunately, that is not the case.

The personal is political ✊

As this famous second-wave feminist slogan states, there is no such thing as the ‘private sphere’ when many personal experiences link to a larger political and social structure. Hence, unless you conform to the norm –  cisgender and heterosexual – you become a threat to social security and stability, you are demonized and discriminate against: your existence and resitence becomes political.

It is society’s responsibility to foster human rights and aim at social cohesion and equality. Thus, it is a political issue if someone’s human rights aren’t respected because of their gender and sexuality. 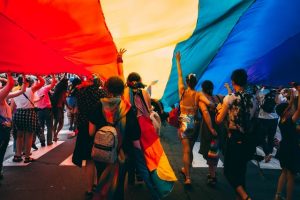 🏳️‍🌈 LGBTQI+ rights are human rights: everyone should have their sexuality and gender identity respected in public life

It is essential to understand that family as ‘the union of a man and a woman’ has never been the only truth, but only the most normalized, mainstream one. We need to move beyond the assumption that our reality is everyone’s reality. Challenging gender binarism and heteronormativity is central to let the LGBTQI+ community live safe and free from discrimination 🌟 .

👉Want to report a hate crime?

You can directly call the police or get in touch with a local reporting facility.
In Lithuania 🇱🇹, you can contact Mano Teises

👉Educate yourself and learn how to be an ally

Access this extensive portal of LGBTQI+ resources for youth and start learning about LGBTQI+ rights and how to be a good ally now! Furthermore, check our implemented Erasmus+ project “Check Your Privilege” to learn and contribute to the fight against social exclusion

What it takes to run amazing online meetings

Quiz: What Type of Project Writer Are You?