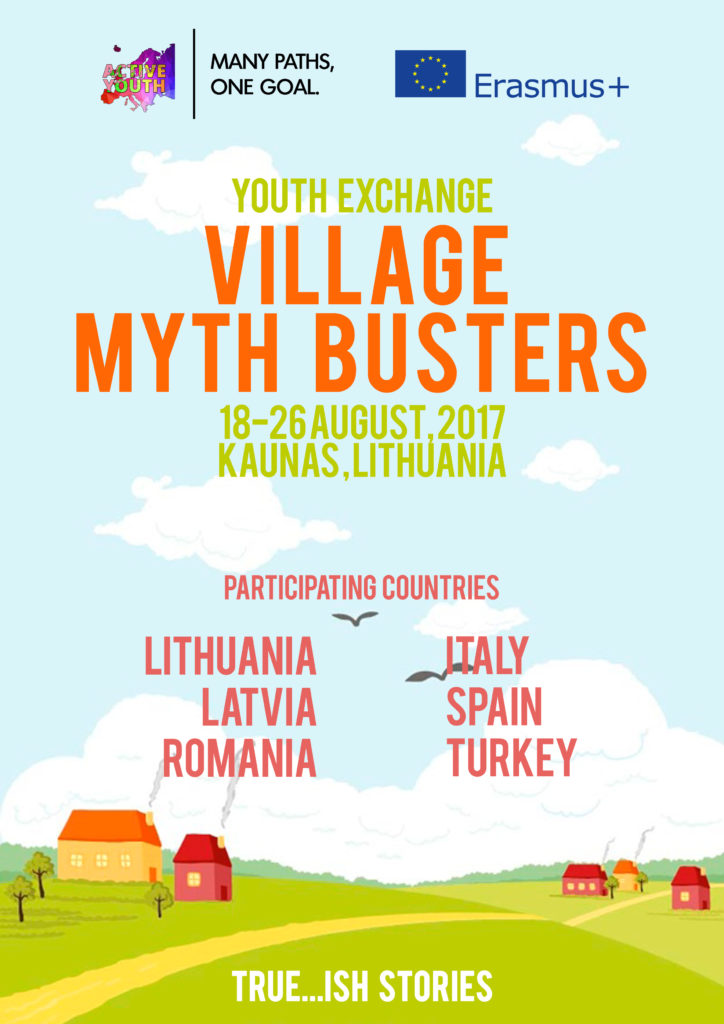 Let’s Break the myths of life in Village!

Erasmus+ youth exchange “Village Myth Busters” (acronym VMB) took place in Kaunas, Lithuania  on August 18-26, 2017. Project’s mission was to change the approach to- and opinion about people from countryside, minimize negative stereotypes towards them and reduce the ensuing social exclusionInspiration for the Project

There are numerous challenges that European societies are facing. One of the sensitive problems that is widely seen across the EU (however, often wrongly-considered as not acute) is social exclusion of villagers in urban areas. This results in young people from villages starting studies in universities and moving to cities facing discrimination, negative stereotypes and, hence, less opportunities

This was proven by an email survey carried out through the network of our partner organisations in January, 2016. In short, it has confirmed that people from rural areas are seen as less educated and are less likely to make friends/contacts (Lithuania, Latvia, Spain), or even sometimes downright consider as second-class citizens (Romania, Turkey, Italy).

We believe that this problem could be best tackled by raising youth’s awareness of social exclusion that people from the villages are facing in urban areas, as well as to provide them with specific tools and support to fight that. Thus project “Village Myth Busters” (VMB) was carried out.

Main objective of the project, as mentioned above, was to to change the approach to- and opinion about people from countryside, minimize negative stereotypes towards them and reduce the ensuing social exclusion. To achieve that, key aims were set: 1) to raise youth’s awareness of social exclusion that people from the villages are facing in urban areas, as well as to provide them with specific tools and support to fight that; 2) to identify the most common stereotypes towards people whose place of origin is countryside, and find ways to tackle that; 3) to spread tolerance, strengthen equality and combat marginalisation; 4) to increase cooperation between village and city youth in order to create opportunities for joint work and social initiatives. The project also aimed to help the participants grow professionally, keep them active, involve them in multi-cultural discussions, develop a number of skills and competences and create new partnerships across Europe.

36 young people coming from 6 different countries (Lithuania, Latvia, Romania, Spain, Italy, Turkey) gathered to discuss the social problems of Europe and searched for answers and tools, which could help solve social exclusion of villagers. Most of the participants already had previous knowledge of volunteering, working with minorities and other excluded groups; thus, information sharing among them was easily facilitated. The participants were from different work fields (photography, secondary school teacher, entrepreneur, etc.) coming from different backgrounds (including disadvantaged). At the same time quite a few participants have previously volunteered in refugee-related projects, worked with minorities, disadvantaged people, etc. Thus, the knowledge gained throughout the project might help in their future initiatives. Their view on the project is best represented by one of theirs quote:

Ismael, Spain “The training was good and I really like the activities. Activities were various, in unseen performance. This will definitely help me when I’m back to volunteer in Spain!”

Check our Facebook Galleries for all the photos of the project:

Here you can also see some of the works done by the participants during the project. If you want more materials, you can contact us.

To achieve objectives mentioned above, a range of NFE methods developed by all the partner organisations were employed. Main activities identified current stereotypes of villagers and revealed best tools for tackling this problem. They also contributed to the creation of non-formal education methods to share the knowledge, and created the means of spreading information about the idea to the public.

Involvement, creativity and initiative of all the participants was encouraged throughout the activities, which included: 1) interactive workshops on the usage of visual arts for social aims, 2) meeting activists and photographers working with project topic, 3) creation of promotional videos; 4) country workshops on the project topic, and much more. Participants took part in creating 5) promotional video utilizing drawing, photography, filming, graphic design, and theatrical plays to get into the project’s topic. Since the project goal was to reach the public and disseminate the results effectively: 6) project booklet was created. All of this ensured that the project would induce a positive effect on the participants, organisations and make an impact at the regional, national and international levels.

During the project, participants had an opportunity to visit local village and witness the hardships villagers come across on their daily basis. During the trip questionnaire was organised which helped participants deepen their knowledge on stereotypes towards villagers.

“What do You know about villages?” – During the project, we set out to Kaunas street with a simple task – ask random people about their opinions regarding life in villages. “Would you live in a village? Why?”; “What are the benefits of living in a village and the city?” – these and similar questions were asked of locals and answers were varied. Some were stereotypical while others introduced a new point of perspective for the participants. All of the results of surveys were recorded in both audio and text which can be seen below.

Rural vs urban – We discovered that one of the main reasons villagers are viewed negatively is of negative impact social media creates. “Picture can speak a thousand words” – with such idea in mind we set out to the streets to see if city and villagers lives are as extreme and as different as they are shown. Do villagers live without roads? Do city dwellers live only in multi-story houses? These and a lot of different questions were raised during the project, which we tried to answer with the pictures provided below:

“Video story” – With all the knowledge and experience gained from the beginning of the project, participants set out to create youtube videos, that would depict stereotypical views of villagers and their life. Comedy is the main driving force when trying to spread your message as far as possible and our participants put a huge emphasis on it. You can see the results below.

The participants also had a chance to meet a social photographer Tadas Kazakevičius (his photography), who showed how photography is an easy way to convey the message and how he tries to show the realities villagers have to live with. They also had to make creative country workshops on combating social exclusion, make open discussion on discrimination and key points when combating it during a “World Cafe” activity, had sessions on successful photography, and more. Every evening participants had a chance to introduce their culture, history and traditional cuisine, as well as the initiatives to combat social exclusion in their countries. They not only showed videos and photos, but also made dances, songs, games and quizzes to get every participant of the project involved.

The organizers describe the project as a success in all senses. Both the informal learning proccess, as well as the sharing of participant experiences among each other worked really well. As the knowledge assessment of the participants showed – the project displayed over 50% growth of knowledge about rural life.

The participants of the project were also amazed by Lithuania. The city culture as well as the beauty of countryside views left a lasting impression on them. Interactions they had with the Lithuanian participants and locals showed how different and truly amazing people can be. In their own words “I learned a lot and I didn’t expect people to be so open and friendly to foreigners”.

All in all, the project induced a positive effect on the participants, organisations and made an impact at the regional, national and international levels. Art was showed as a successful way to tackle different social problems. “Village Myth Busters” is still anticipated to impact the society further. By increasing the scale and the scope of such initiatives, social problems such as discrimination towards people from villages could get the right visibility and be diminished to an extent. We have the confidence that the project participants and the videos and posters they’ve created will promote an interest of young people into the art, and promote further similar projects in all of the European Union.

Youthpass is a tool for non-formal & informal learning in youth projects. With Youthpass, participants of Erasmus+ projects can describe what they have done and show what they have learnt.

Have a look at Youthpass example!

Read more about experiences made with Youthpass – https://www.youthpass.eu

Let us be frank, we use cookies 🍪 for site analytics & to display relevant ads. If you continue browsing this site we will assume that you are OK 👍 with it.
Privacy policy
GAUK NAUJIENAS
X