[info]The Art-booklet of ‘Art Over Problems’ may be found HERE. It presents the social art projects that were done during the youth exchange, as well as the material that could be used in similar projects across Europe.[/info]

Erasmus+ youth exchange “Art Over Problems” (acronym AoP) took place in Lithuania (Stasiunai & Kaunas cities) on September 19-27, 2016. Project’s mission was to provide youth with new skills/tools for solving social problems by using visual arts. You can have a look at some of the project’s best moments here:

Inspiration for the Project

In the context of large inflows of refugees, European societies are currently experiencing a crisis of values, especially in relation to intolerance to other cultures, religious discrimination and inhumane actions towards people simply looking for a safer place to live in. Naturally, when a person feels safe and respected, he/she can then effectively work for the common benefit. Therefore it is necessary to address the integration of ethnic minorities and refugees. We believe that it is best to do so through social art and thus hosted a project “Art over Problems” (AOP) in Lithuania.

By providing youth with new skills/tools for solving social problems by using visual arts, we have contributed to reducing intolerance and discrimination towards refugees and other minorities. The following objectives were tried to be achieved: 1) strengthen youth’s knowledge of the significance of visual arts and the way to use them to influence particular social issues, such as integration of refugees, as well as religious and ethnic discrimination; (2) provide them with means to share this knowledge with others; (3) encourage youth to take on more social art initiatives; and (4) generate fresh ideas for future projects and activities that would use visual arts for reaching social aims within the local communities in the participating countries. The project also aimed to help the participants grow professionally, keep them active, involve them in multi-cultural discussions, develop a number of skills and competences and create new partnerships across Europe.

36 young people coming from 6 different countries (Turkey, Italy, Spain, Bulgaria, Poland and Lithuania) gathered to discuss the social problems of Europe and searched for answers which would incorporate art as a tool. Most of the participants already had previous knowledge of arts, volunteering and working with minorities; thus, information sharing among them was easily facilitated. The participants were graduates of different art schools, those interested in fine arts, studying creative industries or photography, volunteers in student organisations, art exhibitions, culture labs, working with different art forms (from graffitti to photography), etc. At the same time quite a few participants have previously volunteered in refugee-related projects, worked with minorities, disadvantaged people, etc. Thus, the knowledge gained throughout the project might help in their future initiatives. Their view on the project is best represented by one of theirs quote:

[blockquote cite=”Mert, Turkey”]The project was both interesting and fun. There was so many creative projects involved. It’s great that we mostly had to do practical workshops and organise our own social art initiatives! This will definitely help me when I’m back to volunteer in Turkey![/blockquote]

In order to achieve the objectives mentioned above, a range of NFE methods developed by all the partner organisations were employed. The main activities identified the benefits of social arts, revealed best tools for their delivery, generated non-formal education methods to share the knowledge, and created the means of spreading information about the idea to the public. Involvement, creativity and initiative of all the participants was encouraged throughout the activities, which included: 1) interactive workshops on the usage of visual arts for social aims, 2) meeting social artists, 3) creation and implementation of social art initiatives; 4) country workshops on social art, and much more. Participants took part in creating 5) artistic initiatives, origami, utilizing drawing, photography, filming, graphic design, and theatrical plays to get into the project’s topic. Since the project goal was to reach the public and disseminate the results effectively: 6) motivational social art photos and 7) art booklet were created. All of this ensured that the project would induce a positive effect on the participants, organisations and make an impact at the regional, national and international levels.

During the project, participants in international teams had a chance to create their own social art projects in Kaunas city. Full creativity was allowed to find a social problem and then tackle it with different visual art forms. Their project descriptions:

Tackling Phone Addiction – Through this project, we’ve put in the spotlight the growing problem of people spending too much time on their phones. We asked random people on the streets of Kaunas, who were using their mobile devices at the moment, one simple question: “Do you think that you are using your mobile phone too much?”. Then we kindly asked them if it’s possible to make a photo of them, posing with their phones inside a frame, and surrounded by real life “likes”. Their answers were later added to the photo in a speech balloons, with the aim of making them and the people who see the photos to think a bit about the problem of phone addiction.

Another team was also trying to show that people of Kaunas are suffering from the addiction of phones like everyone else nowadays. They created a short video of photos how people are using phones and they don’t see anything around them just their screens.. They don’t communicate, don’t smile and have no reaction to world.. Another part of photos showed when people are not using their phones they are smiling, making conversations, hugging each other and see colourful city around them. With this problem, which we had chosen, we wanted to say that Kaunas is more beautiful than your phone screen so people should use their phones less and pay attention to the environment which surrounds them.

You can see the moments here:

The streets of Kaunas – We were trying to point out the different problems with the poorly maintained streets of Kaunas, especially the problem of the holes in the streets. We first pursued a little investigation and developed a comic using collage, photography and… a lot of imagination. Finally we decided to find a funny solution to the problem: cover the holes with bizarre surreal images in order to create a relaxed and creative environment and to fix a problem that affects all the Lithuanian streets. In order to show our idea we made some photoshopped examples.

Welcome to Lithuania, The Land of the Beautiful: It is touristic campaign that portrays the city of Kaunas and its not-so-touristic attractions. We believe that every city in every country has its own pros and cons, hence we wanted to highlight the minuses and used the slogan in sarcastic way, to show the difference between words and reality, to focus on real problems in the city of Kaunas.

“Kaunas is nice place to date… almost”: The idea came up after spending a little time in this city. We noticed a lot of beautiful people. Unfortunately, we found out some places not so nice (littered, untidy, abondoned). Our team decided to draw society attention with posters which show couples in untidy Kaunas places. We believe that showing the contrast can lead to public reactions. They can become more socially responsible for their enviroment. Who knows, maybe this is the beggining of more beautiful datings in Kaunas. 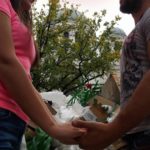 Another activity that was done at the beginning of the youth exchange was the Creative Scavanger Hunt. The activity was meant for both the participants to get to know each other better, and free their creativity. Random word phrases were created and given to the participants to depict visually in a creative way. You can see how they did it below.
Given phrases: Power Punch, Life Line, Green Goblin, Close Call, Fire Flirt, Freaky Family, Water Warm, Greater Good, Crazy Cat, Tiny Talent, Sticky Situation, Simple Scam, Intimate Illusion, Chilly Chance, Tipsy Trouble, Flying Force, Breaking Bad, Dream Drop, Plus Pattern, Short Success.

One of the favorite activities of the participants was the ones that included painting on canvas. First on – “Splash Art” – was dedicated for the participants to let their feelings out on canvas by creating colorful pieces of art. The idea of this activity was to consider that creation of art can be seen as a form of therapy to reduce stress and relax. Another activity was “Turn War Symbols into Piece”. Through this activity, participants were presented well-known war symbols and had to use art to change them into colourful paintings. This activity represented clearly how art can be used to eliminate hate.

Another activity that the participants really enjoyed was “Social Theater”. Participants in international groups had time to really get into different social problems and try to depict them through acting. This way various social topics were touched (e.g. refugee integration), and possible ways how to tackle them were identified via art.

The participants also had time to enjoy Kaunas city, when “Kaunas in Art 2016” events took place over the weekend. These events gave a bigger push for the participants to create their own social art initiatives in public areas.

Another interesting activity was the folding of origami doves, which the participants later hung in Kaunas, Ąžuolyno Park. The key was that the origami had messages of peace and tolerance in Lithuanian and English languages, seeking to promote the message of tolerance to the visitors of the park. It was a  simple, yet expressive and beautiful form of art as well as a step toward solving problems.

The participants also had a chance to meet a representative of “Social Art Projects” (Socialiniai meno projektai), who revealed the secrets behind successful social art project creation. They also had to make creative country workshops on social art, make open discussion on social art and key problems during a “World Cafe” activity, had sessions on successful photography, and more. Every evening participants had a chance to introduce their culture, history and traditional cuisine, as well as the best social art projects in their countries. They not only showed videos and photos, but also made dances, songs, games and quizzes to get every participant of the project involved.

[divider]
Here you can also find some of the posters created by the participants during the project: 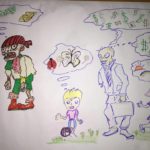 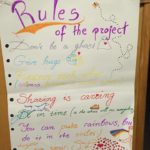 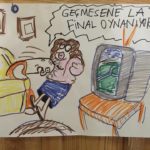 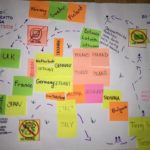 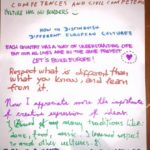 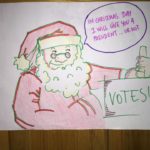 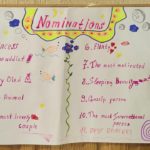 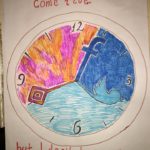 The organizers describe the project as a success in all senses. Both the informal learning proccess, as well as the sharing of participant experiences among each other worked really well. As the knowledge assessment of the participants showed – the project displayed a 50% growth of knowledge on social art by the participants.

All in all, the project induced a positive effect on the participants, organisations and made an impact at the regional, national and international levels. Art was showed as a successful way to tackle different social problems. “Art over Problems” is still anticipated to impact the society further. By increasing the scale and the scope of such art initiatives, social problems such as discrimination towards refugees could get the right visibility and be diminished to an extent. We have the confidence that the project participants and the art they’ve created will promote an interest of young people into the social art, and promote further similar projects in all of the European Union.

Poster of the project: