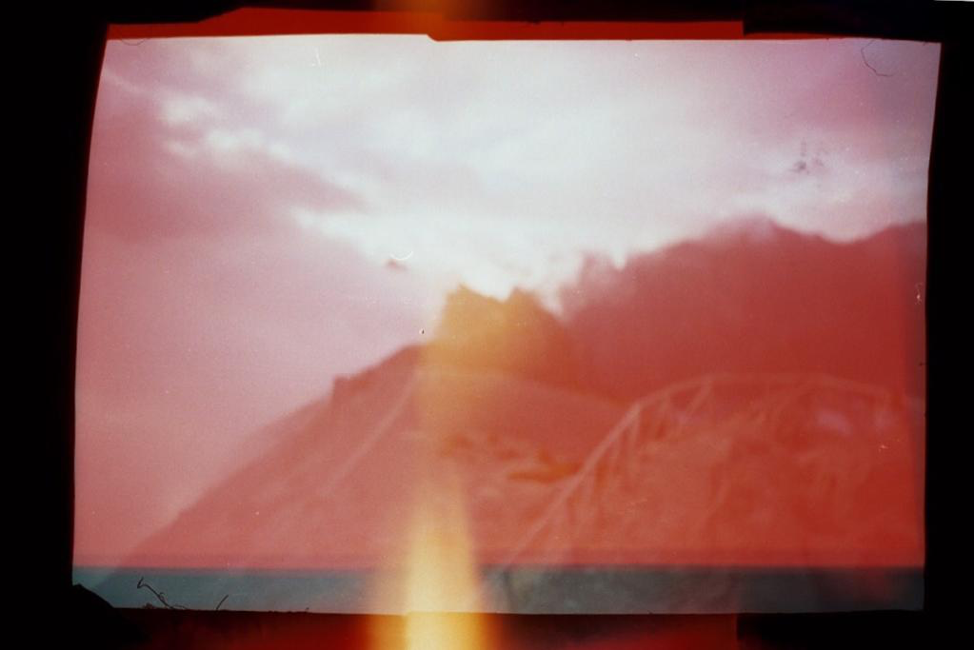 This picture is the reason why Erasmus+ project “DIY PHOTOGRAPHY” happened! Yes, this one! Can you believe it? Well, believe it then! 😀

This is not just a picture- it’s much more than that! It’s the moment captured from one of the highest peaks in Madeira island. I took this picture with my self-made PINHOLE camera at the end of our, my and Kate’s, EVS (European Volunteer Service) project when saying goodbye not just to this incredible island but to each other as well. It was THE VERY SPECIAL MOMENT.

I never thought I could inspire someone! After I have developed the photo film this picture was the only one in the whole film that wasn’t underexposed or overexposed! What a blessing, huh?! What a joy! It was my first try of creating PINHOLE camera and at the end only this picture to happen! When she received the picture she told me she is definitely going to write a project about photography and making a PINHOLE cameras. Isn’t it amazing?

Dreams comes true say and so do projects! 😀

After a while 30 photography lovers got along in Bitola, Macedonia! Lovely guys from Denmark, Macedonia, Lithuania, Spain, Estonia and Slovakia came together for Erasmus+ Youth exchange.

First days we had an easy going program full with icebreaking and to know each other games! Meanwhile bonding with the group we had a workshop of creating PINHOLE cameras. It’s the simplest camera possible. It consists of a light-proof box, some sort of film and a pinhole. 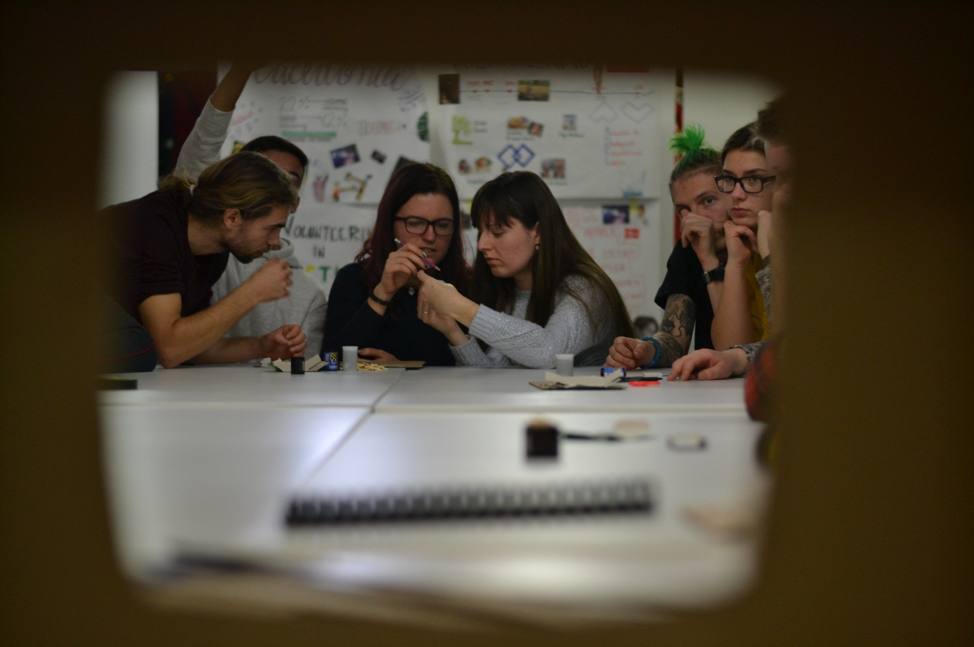 Leading the workshop was the biggest challenge for me during the whole project. To my surprise everything went well! Yeeey! 😀 Next step was to make great shots!

Our task was to make local people (and not only) more aware of certain issue in local communities. Each group had one of the following topics: “Brain drain,” “Animal rights,” “Pollution,” “Human rights,” or “Addiction,” working on using photography as a tool. 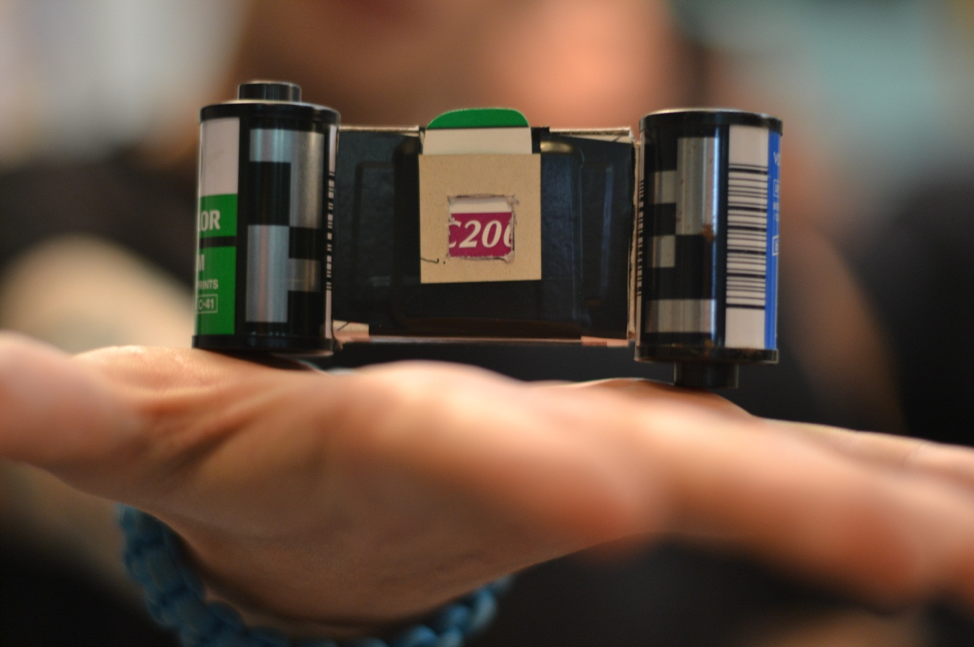 After almost two days working on the topics we had a day in photo lab. One of the most exciting days! Developing the films in completely dark room and waiting for a miracle! 😀

Seeing faces like they have just found a treasure filled my heart with happiness. Every film got more than 1 great shot! Each group choose the best 6 pictures which represents the topic.

As the result of the project we had a beautiful photography exhibition! 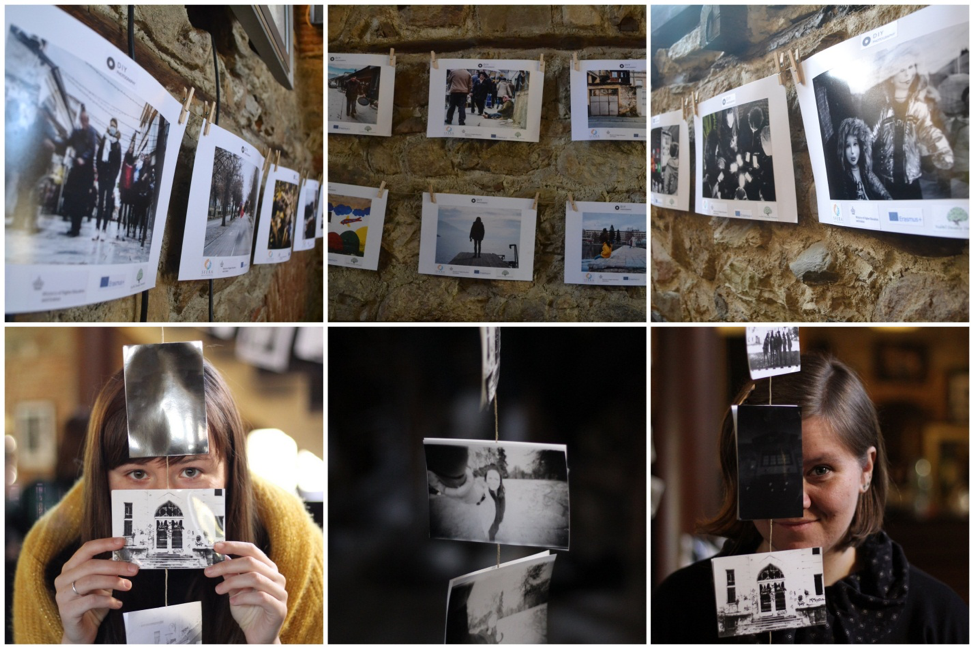 Shortly, this is why you have to do things you LOVE!

“To me this project sincerely gave so much than I expected. And it wasn’t even my first project to begin with and so because of that I knew what to expect from it, but still my hopes and expectations were strongly surpassed.
–
The people I met here gave me inspiration and not only in the topic of the project, but also to do what I have been dreaming of doing for the past couple of months but never had the courage to do so. When sharing our personal experience with each other I got inspired to live my life as I want to and not how anyone else in my life wants to. So that was the biggest and most grateful thing I’ve received from this project. Because of it, I’m once again getting to know the world, helping others and meeting amazing people.
–
But of course it wasn’t the only thing that left with me after the project. The project itself was so well made, so greatly executed and so interesting to be a part of that my mind still sometimes wanders to the activities we did during that week. I did the full cycle of photography for the first time, including making my own pinhole camera, shooting with it and then seeing the results in the lab while we were developing the shots. It was truly amazing experience because now since most of the pictures are digital you just think they are just born like that. Another great thing about the project is that it involved problems of the local community, so all of the topics for our group photography projects were selected by interviewing local people during one of the protest, and so were very real and hopefully eye opening to the local when they would see our results in the exhibition.
–
So all in all I’m extremely happy I got to have the chance to be a part of this event and meet these amazing people. Special thank you to the organization team because everything went as smooth as butter, from logistics to the classes. Greetings from one happy participant.”

“I have participated in about 5 youth exchanges but this one surpassed all of them. First of all, the hosting organization and their hospitality was incredible!
Second reason why this exchange was my favorite is the topic and how we adapted artistic, creative and fun activity (photography) to spread important messages to the community. Usually projects don’t bring so much new thoughts for me but the people I’ve met and activities I’ve done made a change in my life. And I’m not even hyperbolizing, I mean it. To participate there was one of the best decisions I’ve made.”

“‘DIY photography’ was an interesting topic for a project and I couldn’t resist to sign in. I’m glad I did. This project overloaded my expectation million times. Talking about photography and country issues every day made the project so special. It was deep. I brought home not only memories about the fun stuff: taking pictures with no complaining, because everyone loves that, singing banana song in the dark photo lab, silent mafia games and flashmob repetitions. I also brought home memories about the cats in the garbage containers looking for food, about the massive demonstration for the animals in the city, about the pollution in Macedonia and its smell in the evenings. It just made me think wider. Im thankful for that.”

“Hey, I’m Chris and you prolly know me the best for my “burgers”. At first I felt kinda weird not knowing if others will like my humor and personality so I made a few friends. But it was crazy good when I got to share amazing experience with like half of the people from the project. I felt at home, no I felt more than that, I felt alive and liberated, as if we were on the same movie. It was truly a mind-opening experience. The project was coordinated flawlessly, I mean cmon even I managed to follow the programme and not get bored. All in all, I grew as a person during this amazing trip and I can’t be thankful enough for everyone that was involved in the project, especially people that I maybe didn’t spend as much time socializing with.”

Big thank you from all of us!